One of the most interesting camper concepts of last decade, Dethleffs’ E.Home Coco showed how a trailer could take some of the “tow” out of “towable,” using an electric drive to create its own motive power to lessen the load on the tow vehicle. As it turns out, Dethleffs isn’t the only company pondering that very idea. Australian startup OzXcorp is hard at work on a supplementary electric drive to turn hard-edged Australian off-road caravans into semi-self-propelled all-terrain RVs with Level 4 autonomous capabilities. Not only can its “hybrid drive” cut the load on the tow vehicle, it can maneuver the trailer to and from the vehicle, and muscle through sand, mud and other wheel-sucking off-road terrain that might otherwise turn caravan into anchor.

It seems motorized camping trailers are on their way to becoming a reality. We had our doubts when Dethleffs introduced the E.Home Coco concept at the 2018 Düsseldorf Caravan Salon, as it could have simply been one of dozens of pie-in-the-sky vehicle concepts shown one year, forgotten the next. But the German company has been testing its own hardware and showed the E.Home Coco again at the 2019 Caravan Salon, indicating the Coco is more than just a one-and-done show vehicle. Now that we see a second company pursuing the world’s first electric-driven caravan, it seems only a matter of time before a powered caravan hits the market. Only question is, will the market be Europe, Australia or somewhere else?

It very well could be Australia. OzX is already testing a prototype drive it plans to have ready for market as soon as next year. Company co-founder and chief technology officer Andrew Huett tells us the marketable hybrid drive could take several forms, but OzX is currently leaning toward hub motors for each trailer wheel versus a single motor and differential at each axle. The hub motors provide for precise wheel control and improve overall system efficiency, according to Huett.

Each hub motor puts out up to 11 hp of continuous power, capable of a 30-second peak-power burst of 22 hp. The system continuously adjusts motor output to keep the trailer and tow vehicle in sync, lightening the effective weight on the hitch without overpowering the trailer and creating handling and safety problems.

The trailer packs energy in a 14.3-kWh lithium battery pack, the same size pack OzX supplies for the ERV gas-free solar caravan. OzX doubles the battery to 28.6 kWh for four-motor, dual-axle trailers. Huett believes that by year-end advances in battery density might add about 22 percent to those battery capacity figures. 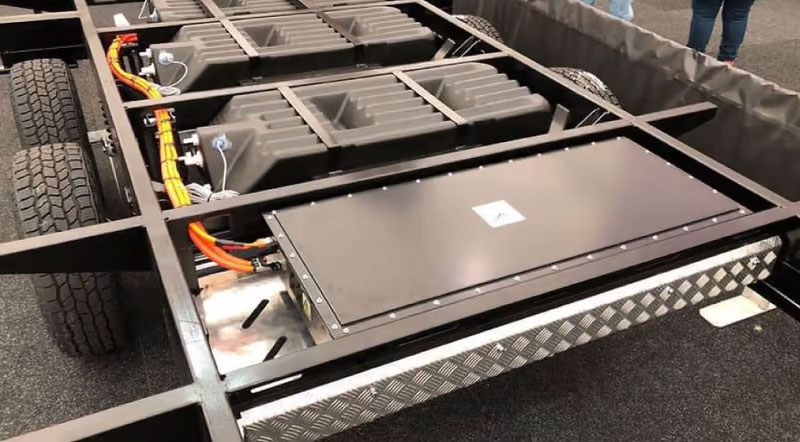 Shown here on the ERV chassis, a 14.3-kWh lithium battery pack also lies at the heart of the OzX hybrid drive – Retreat Caravans

“One aspect of caravanning that remains a burden on every driver is the constant reminder that your caravan is affecting the performance of your vehicle, fuel consumption, maneuverability, traffic flow,” OzX explained in introducing the hybrid drive last year. “Many adventurers opt to buy vehicles that are equipped with significant engine capacity and gross vehicle mass to mitigate the burden of towing and power loss; however, this improvement in driving experience comes at a significant cost in the purchase of vehicle, fuel and the environment.”

It’s not yet clear if a combination of OzX self-powered camping trailer and modest vehicle will end up being all that much cheaper than a modest “dumb” trailer and heavy-duty tow vehicle, but OzX’s e-drive boasts several advantages that could prove invaluable to caravan owners. With the trailer helping to “pull its own weight,” a gas vehicle enjoys fuel savings while an EV gets a modest range boost. The electric drive also smooths out the overall ride, decreasing the pull of the trailer during acceleration and hill-climbing and applying torque vectoring, real-time stability control, anti-lock braking and brake-blending when needed. Suddenly, towing a large, heavy trailer is much smoother and less onerous, a more enjoyable start to a vacation.

The OzX drive also helps ease possibly the most nerve-racking part of caravanning: parking. With help from an accompanying smartphone app, the trailer can drive itself at a max speed of 1.2 mph (2 km/h), maneuvering into a campsite parking space, navigating into and out of storage, or lining up with the vehicle for hitching. OzX is also exploring the possibility of an advanced Level 4 breakaway system through which the trailer could self-drive at speed, navigate traffic and pull to a stop off the highway.

While camping, a hybrid drive-equipped trailer becomes a further evolution of an ERV-style all-electric caravan. Campers rely on the large battery to run all or most onboard equipment, including AC/heat, induction cooking, and appliances like toasters and coffeemakers. The hybrid drive’s regenerative braking couples with solar panels to charge the battery, both at camp and on the move.

OzX introduced a working on/off-road prototype last year, which you can get a look at in this video, and plans to continue testing and development through 2020, with a market release to follow thereafter. It will be announcing the names of partner caravan manufacturers in the coming months. The hybrid drive could certainly benefit any style of trailer, but OzX is refining the concept specifically for the needs of the caravan and marine sectors.

Newer Is This Remote-Control, Self-Powered Trailer the Future of Overlanding?
Older Is this the caravan innovation of the decade?
Shop
Sidebar